About her Father’s Murder 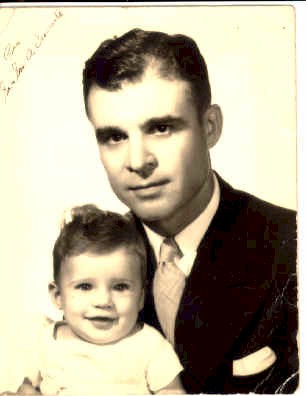 May 1967 was going to be the best ever! ... Graduation from Balboa High School ... acceptance to a stateside university ... but most of all, I was going to meet with my father after being separated at infancy due to divorce. I had so many questions for him--where had he been for all this time, why had I not been able to see him, how or why would anyone forget having a daughter? So much mystery. To add to my confusion, no one on my maternal side of the family would answer my questions. The only replies I would get were typical platitudes--"We don’t know. Why are you so anxious to meet a man that doesn’t seem to care about you?" My heart and mind told me differently. Knowing I would be leaving for the United States and not returning, I was determined to find out more about my father and ask all those questions I’d been yearning to have answered.

Easter Sunday was the day I selected. Like the holiday, it would be a renaissance, a chance to be reborn to a parent I hadn’t known. I prepared myself for disappointment and rejection. I did not expect him to be receptive.

I arrived unannounced, he was working in his carport at 5411 Harrod Place in Diablo Heights, Canal Zone. To my great surprise he greeted me warmly and the reunion was like those found in fairy tale books ... and then some!  My father obviously cared about me. He shared with me a meticulous scrapbook filled with newspaper clippings and other memorabilia that he had carefully collected --all about my accomplishments and me. The afternoon zipped by quickly so we made an appointment to meet the next day at the Balboa Club House after my swim team workout.

We met as scheduled and shared an order of French fries and gravy with a coke. As we sat together he helped me fill out admissions papers for college, gave me important information on his naturalization, work and private life. The meeting was brief, but warm. He took me home in a downpour.

At the time of our clubhouse meeting,  I had not yet been able to muster up the courage to ask all the questions I had prepared. Everything had been so wonderful up to this point, why ruin it?  When he pulled into the driveway to drop me off, I asked him if I could come back from college to the Zone and spend Christmas with him. I was at first delighted and then overcome —"I’d like that," he said, "but you will never see me again. I fear my life, I have something they want."  I never saw him again. The next day he was found dead in the backyard of his weekend home in Las Cumbres, Rep. of Panama..

A copy of his autopsy report from the Santo Thomas Hospital in Panama states that he died of crushing blows to the face and head and maceration of the brain -- massive head trauma. Based on what he had told me the day before, I knew this was not an accident. I immediately began to search for answers on my own. The Panamanian police told me he had been accidentally shot by a young man who had mistaken my father for a duck--a very unlikely occurrence. A newspaper account said he slipped and fell on his own weapon and it fired. The photograph in the article has a title of "Misterio" or mystery.   Incorrectly the obituary listed no children in the list of survivors..

The doctor whose name I do not know and who pronounced him dead at the scene, was from the Canal Zone. When I asked him how my father died, he told me that he didn’t know. This same doctor invited me to his office promising to give me further information. I went to his office in the Canal Zone for several days consecutively. He refused to see me.

William Morgan Kosan went to work in the Canal Zone and Panama as a young man to help provide for his family living in Pennsylvania. He was born September 27, 1911,12, or 13.   He died April 20, 1967 and  is buried at Corozal Cemetary, which then was in the Canal Zone. His tombstone reads:

My father loved his life in Panama and the Zone. He devoted many hours documenting the history of it through film. His movies of jungle life have been presented in Panama, the Canal Zone and abroad. He also produced several movies for the medical profession filming some spectacular operations. I was told he was involved with the founding of the US Army’s Jungle Warfare School at Ft. Sherman and that one of the rooms there bears his name.

Losing a family member is painful enough. Losing your father a few short hours after a joyous and long awaited reunion is devastating. Not knowing why or how he was killed makes it all the more difficult. I want to know what he was like as a human being, a neighbor, a friend, a co-worker. My children ask questions--I have few answers. What is it like to fear for one’s life? Where can I, as his daughter, find answers?

Unfortunately, I have little information about his life in the Zone or his work with the Panama Canal Company. I do know he worked on the Atlantic side in the forties. Later he lived and worked on the Pacific side. A newspaper account about the graveside service states he was a shift engineer in the Electrical Division Power Branch at the time of his death.

You ask, "why do I want to know now after thirty years?" I’ve always wanted answers, but back then the devastation and feeling of helplessness was too big a gap to bridge. Now it is burning a hole in my heart, and I MUST find out.

Please ... if anyone reading this article can shed any light on this case, my family and I would be very grateful. I would like to put this matter to rest and know that my father did not die for naught.

I plan on attending the PC Society Reunion in Orlando in July ‘98. I would welcome anyone who knew my Father to share his or her memories about him with me in person at that time. Thirty years is a long time to carry this burden, I look forward to any and all memories that you can add to my scrapbook about a very special person¼ my father.