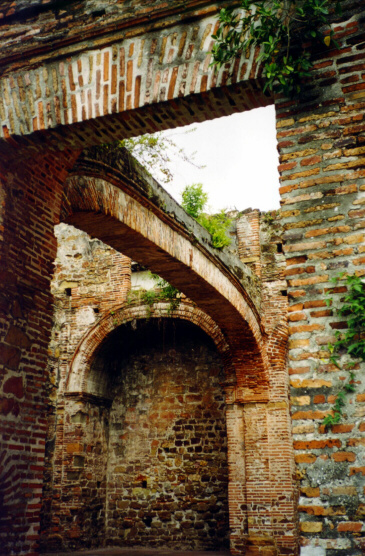 "The collapse of the 325 year old Arco Chato (the Flat Arch) here in my barrio last night is indeed a sad, sad thing. The ancient Arch was also made famous when the United States Senate approved Panama as the location for the construction of the Interoceanic Canal in Panama when in their final deliberations for determining the site for the construction of the Canal, Bunau-Varilla sent each U. S.Senators a Nicaraguan stamp picturing a volcano right in the center of a Nicaraguan lake. The lake was to be part of the proposed Nicaraguan Canal. In addition Varilla sent to each of Senator a postcard showing the 50 foot Arco Chato in Panama as a testimony and proof of the stability of the land mass of the Isthmus of Panama which had withstood centuries of earthquakes and fires.

In my opinion it's no wonder that it happened. Since the CascoViejo (my barrio) has become one of the "must" places to see here inPanama, behemoth buses carrying tourist waddle down the brickstreets...their vibrations shaking the core of all the ruins in the neighborhood. When there is a cruise ship in town, sometimes there are eight of these giants dinosaurs trooping through the neighborhood. The heavy flow of traffic was also a factor in the deterioration of the the ruins of Old Panama. Not being anti-patriotic, but the parade of the school bands with the kids pounding drums and playing screaming brass horns, regrettably, may have been one of the final coup d´Gras contributing factors to the collapse of the Arch. Their enthusiastic, fervent playing is enough to awaken the dead. The bands marched in this area on November 3 & 4 this week in celebration of Panama's Centennial. The parades were delayed on both days up to five hours. The students waiting to pass in review in front of the Presidential Stand in Cathedral Plaza stuck on Avenida A and in the sidestreets rehearsed their blaring music with full intensity. What else were they to do for five hours? At night there are traffic jams especially on Thursday and Saturday nights as people flock to the disco, restaurants and bars here in the lower part of San Felipe. While there are signs limiting the tonnage of the vehicles coming into the area, these limitations are not always strictly enforced. Even now as I type this email, heavy traffic flows by my house.

I just visited the site and there are reporters, cameramen, and sub-officials of the Government checking out the site each pointing upwards and outwards at a vacant space. It's an eerie scene not seeing the famous Arch in the void where it was up until last night. The actions of the spectators is reminiscent of a silent film. Really, they should all be pointing at one another...myself included...for we are the culprits of why the Arco Chato crumbled.

Another factor which may have affected the collapsing of the Arco Chato were the fireworks fired here on November 3.  That evening, the fireworks were set up on the esplanade across the street from my place here in the Casco Viejo.  The barrage went off as schedule at 12:02 a.m. November 3, 2003.  There were thousands of people here in the Casco Viejo who came to see the show. I thought that it was great seeing these rockets and bombs bursting in air, but at the end of the show (and, I believe, to conclude the show which lasted about 45 minutes) there was a salvo of booms that jarred the neighborhood.  In the States at the conclusion of similar patriotic events there are usually 50 canon shots to honor the 50 States, but here there weren't that many blasts.  It's just that these booms were almost sonic in nature. They were at our doorstep.  About an hour after the fireworks had ended and people had left the area, we were surprised by another salvo of at least eight of these sonic booms that shook the windows of my bedroom and the buildings around my place.  The dog fell off the bed and started to bark.  I only live about 100 feet from the Arco Chato. Those blasts could have easily weakened the foundation of the arch because of the proximity of where they were ignited in relationship´to the Flat Arch. The impact of these shock waves was like standing in a field and jarred by a jet flying overhead when it breaks the sound barrier. I can only conjecture that perhaps this final salvo included these bombs which were not fired during the show for some reason and a decision was made to explode them at this time."