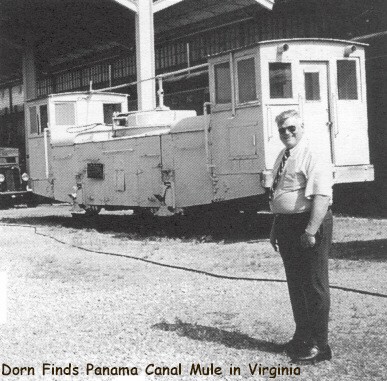 The Locomotive is located at the Roanoke Transportation Museum at Roanoke, Virginia.  Number 686 is one of the original fleet of 40 units built by General Electric, in Schenectady, New York, for the Panama Canal in 1914.  During its operating lifetime it was referred to as a Lock-Mule of "Mule" by its operators.  Additional units were ordered and delivered later until over 100 mules were in operation at the three lock locations (Gatun, Pedro Miguel and Miraflores) within the Panama Canal.

For longer and heavy ships, additional pairs of Mules were added to make sure that the ship was always under control of the Mules and able to be moved or centered regardless of water and wind disturbances.  the third pair was normally added at mid-ship, middle of the ship's length, with fourth, fifth and sixth pairs added as required to the previous described locations (bow, mid-ships and stern).   A heavy and long ship, like the Battleship USS Missouri that weighted 45,000 tons, required six pairs or twelve Mules for a smooth and uneventful transit through each Panama Canal Lock.

This locomotive, along with its' sister units, remained in active operating service until 1964 when they were replaced by new units designed for operation on the new electrical power frequency (60 cycle) that the Panama Canal was converted to.  the entire Canal was built and operated until the mid 60's on 25 cycle electrical power.

Shortly after removal from active service, this specific Mule (No. U.S. 686) was donated by the Governor of the Panama Canal to a proposed "American Museum of Electricity" to be located at Schenectady, New York.  Through the cooperation of the U.S. Navy and several American railroads the Mule was transported by sea to Norfolk, Virginia and then by rail to Schenectady, New York.  At that time it was placed in storage until the Museum could be established.

In 1972 the Mule was uncovered by a former resident of the Panama Canal Zone still in storage as plans for the proposed Schenectady Museum had stalled out.  Knowing of the existing and operating Roanoke Transportation Museum this former resident arranged for the two Museum groups to cooperate and move the unit to Roanoke for permanent display.

In May of 1974, the Mule arrived in Roanoke, Virginia with its rail transportation donated by several railroads as an "Historical Transportation" item.  The Mule is now being restored to its original appearance as a joint project of the City of Roanoke and the Roanoke Chapter of the National Railway Historical Society.  when restoration is complete the exhibit will be dedicated "To the Men and Women that participated in the construction and operation of the Panama Canal."

This Mule is of interest not only for its historic association with the Panama Canal, but also because it is one of the early applications of 3-phase electric motors to traction equipment.

The Locomotive is designed for 220-volt, 3-phase, 25-cycle power.  It is geared for 5 mph speed running free, (not connected to a ship) with a manual gear shift to 2 mph for rack-and-pinion operation while towing.  A special electrical connection is available for concatenating the motors to run at about 1 mph at reduced torque, which was used for movement of extremely large ships.

The machine is just under 32 feet long by 8 feet wide and 10 feet high, and weighs 42 tons.  It runs on four flanged wheels similar to railroad wheels, but on a 5-foot gauge.  Wheelbase is 12 feet.  It has dual Electrical and Mechanical controls which allowed its operation from a cab at either end, and has an elaborately controlled winch at top center.  Towing capacity of the complete unit (Traction Motors, Winch and Ship Cable) was 25,000 or 12 1/2 tons.