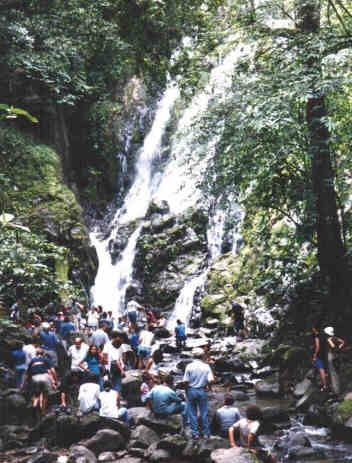 Nestled deep in the mountains of Cocle Province, some 76 miles west of Panama City, lies a lovely Eden-like valley where the natives still cherish their legends and are swayed by the enchantment of superstition.

Found here are strange trees with square trunks and the rare golden colored frogs, much sought after by universities and scientific institutes.

According to archeologists, this beautiful valley was the hunting ground and haven of Indians in pre-Columbian times.  Mysterious inscriptions, which to this day have not been deciphered, are found on huge boulders throughout the area, remaining muted testimony of the early inhabitants.  thermal springs, unseen by  most visitors to the valley, produce waters of near boiling temperatures.

El Valle de Anton, approximately 4 miles long and 3 1/2 miles wide, is completely surrounded by mountains, leading some to believe this valley might have been the crater of a large volcano.

Both Panamanians and Americans have built homes here.  Lovely flower gardens and swimming pools complement the residences which range from modest weekend retreats to luxurious country estates.  It is not uncommon for El Valle to become the summer capital for a long weekend.  The President of the Republic and his entire cabinet, plus other government officials, go there to enjoy a respite from the heat of the capital during the dry season.

From the main road of the town and facing northwest, one can see a silhouetted mountain known as La India Dormida, the Sleeping Princess, which has inspired one of the most beautiful legends of Panama.

Flor de Aire, as the Indian princess was called, was the daughter of Urraca, the most fierce of chieftains who fought against the Spanish conquistadores on the Isthmus.   Flor de Aire fell in love with one of the handsome conquistadores who was trying to conquer her people and because of this impossible dilemma, rejected the love of Yaravi,the bravest warrior of her tribe.

In his despair, Yaravi leaped to his death from the top of the mountain before the yes of the horrified maiden.  Flor de Aire, not wanting to betray her tribe, never saw the Spaniard again.  She wandered aimlessly through the mountains and valleys crying his misfortune until she died on the beach, looking toward the beloved mountains where she was born.  the mountains, to perpetuate this sad love story, copied her image.  The legend was embellished by the great Panamanian author, Julio B. Sosa.

The "Cholos," as the inhabitants of the mountains surrounding El Valle de Anton are called, are descendents of the Indians who escaped enslavement and sought, in the mountains, the freedom they no longer could enjoy in the flatlands.  Today, they are Christians, and most of them can read and write, thanks to the efforts of the government in providing schools for them.

Despite mixing with other races, the Cholos still maintain the characteristics of their ace.  they are of average height, robust of build, with angular faces, well-formed noses, expressive eyes and thick, black, straight hair.

They are shy and submissive as a result of their first encounter with the white man.   On Sundays they come down the mountains to sell their products at the market and to attend mass at the church a few steps from the marketplace.

In 1928, Panamanians who had discovered the peace and beauty of the hidden paradise in the Cocle mountains built a road making the valley accessible to the outside world.  Road builders followed the natural contours of the mountainside and courses of rivers and streams.  There are no bridges on the 18 miles of winding blacktop road going from sea level up to 3,000 feet where the valley is found.  Twisting through the mountains, the drive offers breathtaking scenery not easily forgotten.

The rich soil rewards the efforts of the farmers with abundant yields.  Sugar cane, yucca, yams, tomatoes, oranges, lemons and many other products may be found at the open market on Sunday mornings.

When the land cannot be worked because of heavy rains, the mountain dwellers weave baskets of varied colors and shapes.  Or, they may carve wooden articles, such as "bateas" (wooden trays) and stools with primitive Indian designs.  These they sell to tourists and churchgoers who stroll to the market after ass.  they also make molds of brown sugar called "panela" which is used by people in the interior of Panama.

On the El Valle River's course, which meanders through dense forests west of town, there is a picturesque waterfall known as the Maiden's Waterfall.  This is a favorite picnicking place for visitors from the capital.  Natives from the mountains say with all sincerity:

"There, on a clear day when the sun comes up, Flor de Aire comes down from the mountain peaks to the edge of the river ... there, with other Indian maidens, she tell the crystal waters of her eternal grief.  One can hear her mournful weeping as she tells her tale of woe.  Remembering her two lovers, she weeps sorrowfully before returning to her sleeping position high up on the mountain that bears her name."