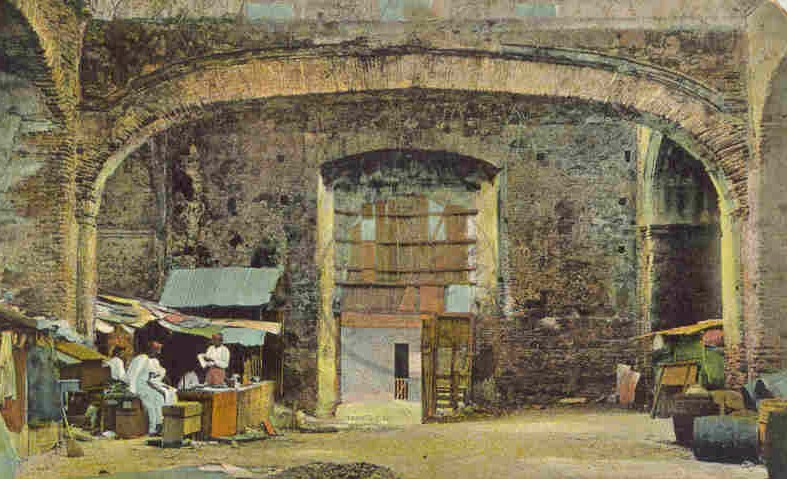 The fact that the flat arch in the ruins of the Church of Santo Domingo has stood for three centuries without a support is said to have had a part in the decision to build the interocean canal in Panama.

Continued sturdiness of the arch reportedly led engineers to believe Panama to be less subject to earthquakes than Nicaragua, which had been subjected to periodic seismic tremors.  Legend says that the Catholic friar in charge of construction of the arch stood under it when it went up for the third time. It had collapsed on two previous occasions.  The third time it stayed up, the legend says, asserting that his faith had held the "impossible arch" up.  But not before it had sagged slightly, which made it a "flat" arch.  It had been designed as a regular keystone arch.

Santo Domingo, originally the most splendid religious temple in the rebuilt city, was destroyed by fire in 1761.  The ruins are on Third Street at Avenue A.

The City of Panama was founded August 15, 1519.  It was sacked by Morgan and his pirates January 28, 1671, and rebuilt, the ceremony marking its rebuilding being held January 21, 1673.  The city abounds in relics of colonial days.

On Cathedral Plaza t the beginning of Central Avenue is the new Cathedral.   Construction began in 1688 and it was finished in 1796.  Its bells were brought over from the ruined Cathedral of Old Panama.  It is said that when the Spanish queen visited Badajoz, Spain, upon being told that they were casting the bells for use in the capital of the Kingdom of Tierra Firme (Panama), "threw her Royal finery of purest castilian gold into the melting pot, there to mix with the bronze."

In San Jose Church at Eighth Street and Avenue A is the renowned Golden Altar, saved from the greed of Morgan's pirates and transferred to its present site unharmed.