Pearls and Gold have played an important part in the history of Panama. And the mosqueta, created by combining the two in an intricate work of art, has become one of the symbols of the country.

When a Panamanian girl pins her grandmother's mosqueta on the pom pom on the front of her pollera, the national dress of Panama, she may marvel at the beauty of the gold and pearl brooch and wonder how it happened to be created. Many visitors, purchasing them to take home, also express curiosity about the origin of the design.

No one knows for sure when the first mosqueta was created or who the designer was. But it is fairly certain that the gold and pearls of Panama were first joined in the delicate beauty of the mosqueta by jewelers from southern Europe who migrated to Panama, bringing with them their skill in gold filigree work. At that time, labor was cheap and pearls from the Pearl Islands were plentiful.

There is a story that the brooches reminded the jewelers of a beautiful blossom and they began to call them "mosquetas,"the Spanish name for the white musk roses of the Mediterranean area. 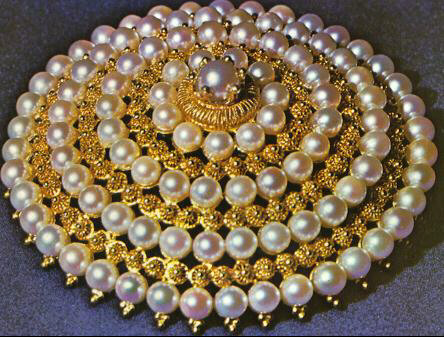 These old mosquetas, fashioned of the famous Pearl Island pearls, are now treasured heirlooms passed down through the generations. In more recent times, they have inspired a complete line of jewelry including rings, necklaces, and earrings.

So the mosqueta is really a final chapter in the history of the Panama pearls,a history that started as far back as Balboa and ended abruptly in 1938 when the Red Tide spread over the Bay of Panama and destroyed the oyster beds near the Pearl Islands.

Balboa was probably the first foreigner to know about the fabulous pearl beds. Legend says that on reaching the Pacific after his crossing of the Isthmus, he was met by an Indian chief whose scanty costume consisted mainly of pearls. Even the chief's canoe paddles were studded with pearls.

The Indians brought him pearls from Panama Bay and told him of even more wonderful pearl beds farther north, but Balboa was unable to pursue the matter. He only made notes in his log. When reports reached Spain of the fabulous Panama pearl beds, other explorers with more interest in plunder than Balboa arrived to look for them and soon the riches of the Gulf of Panama were on their way to Spain.

One of the most magnificent of all the pearls found in Panama is "La Peregrina," or wanderer, which has been worn by a Spanish king, an English queen, a French emperor and today belongs to one of the most beautiful and celebrated women of the world, Elizabeth Taylor.

When it was found in the Gulf of Panama 400 years ago, it was considered so magnificent that the Negro slave who discovered it was rewarded with his liberty and his owner was given a grant of land and a title. 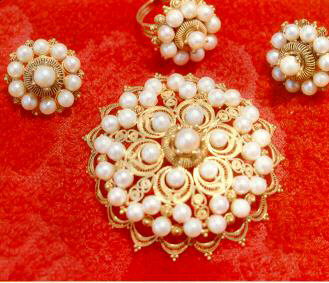 A set of Mosqueta jewelery

But, according to Joan Younger Dickinson in "The Book of Pearls,"the large bulk of the pearls taken to Spain, was reckoned by the pound, or marc, and no records have been found describing the various sizes and types. It is possible that great pearls arrived in Spain by the bagful and were dispersed along with quite ordinary ones. One thing is certain, in the early days Panama was left mostly with the rejects.

One of the first mentions of the use of pearls in jewelry in Panama is made by a French engineer who visited the Darien in 1821. He writes of women celebrating independence from Spain proudly wearing large gold combs and earrings decorated with the "inexpensive" pearls from the pearl fisheries of Panama.

An English woman, Lady Emmeline Stuart Worley, traveling through Central America and Panama in 1849, mentions in her book seeing a nursemaid pass her room in Panama accompaning a child whose dress was resplendent with diamonds and pearls. "The pearls were wonderfully splendid," she added, "because in this native water is a regular pearl industry. These treasures of the deep are abundantly found around the island and prove a profitable source of employment to a considerable body of men who follow the laborious occupation of divers."

And the occupation of the pearl divers was indeed laborious. In the early days, slaves were sent to get the pearls. They descended into the cold, deep waters of Panama Bay with stones tied around their legs. Many of them died of exposure to pressure, of cold and some were killed by sharks.

By the early 19th century, the pearl shells of Panama were to become more in demand than the tiny pearls they might contain. The occasional pearl that might bring $2,000 on the Paris market was considered "gravy" to the merchants who were shipping shells to Germany to feed the largest mother of pearl market in the world. As early as 1888, Woldred Nelson tells in his book, "Five Years in Panama" of the island of San Miguel where he found a stone church, the towers of which were covered with pearl shells. The pearl shells that adorn the twin towers of the Panama Cathedral in Panama City, which came from the Pearl Islands, are still being admired by visitors.

By the time the European immigrants were fashioning the early mosquetas with gold filigree work and pearls, the Panama pearl already had a long history.

The original handmade mosquetas and those produced later with crude tools cannot compare to the magnificent mosquetas made today with their perfect cultured pearls and the finest filigree wire. Nevertheless, these early pieces, made with thick wire and thick gold cups, are cherished heirlooms.

Because the baroque pearl comes in odd sizes and shapes, the old mosquetas were mostly filigree work. The jeweler who used 40 or 50 pearls in a mosqueta had to make a gold cup to fit each one, a tedious, time-consuming job not economically feasible today. 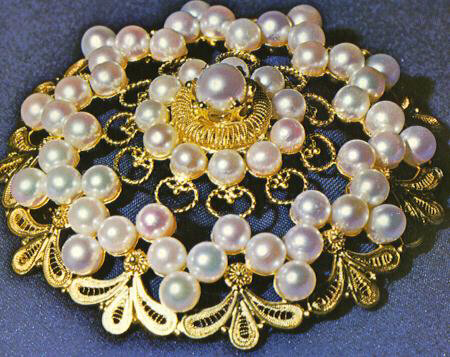 Panama jewelers were not faced with the problem after 1938 because the Red Tide killed the oyster beds. The Red Tide, which occurs to some degree at the end of each rainy season, is caused by a half-plant, half-animal that the biology books call Gymnodinium brevis. It reproduces with incredible rapidity causing vast stretches of the water to be stained a reddish brown. After the organisms die, they release a powerful nerve poison that kills sea life by the hundreds of tons.

Red Tide outbreaks are worse in years of heavy rainfall, and the near record 85.61 inches of rain in 1938 preceded the worst Red Tide in Panama's history.

Since no pearls were available on the Isthmus following the death of the oysters, no mosquetas were made at all until the early 1950's when cultured perls were first imported from Japan and filigree wire, produced by machine, was imported from Europe.

The few jewelers who started to make mosquetas were not prepared for the sudden overwhelming popularity of the various pieces. To fill the demand, Panama imported more pearls from Japan and they ordered the pearls to fit the gold cups of the mosqueta rather than making the cups to fit the pearls.

This reverse order in jewelry making was made possible by the genius of the Japanese pearl merchants, headed by Kokochi Mikimoto. After a lifetime of experimentation, he succeeded in discovering a method for culturing pearls in mass quantities. They are perfectly shaped, come in various colors and in any size. In fact, there are so few natural pearls available these days that when pearls are mentioned they are usually cultured pearls.

In creating the cultured pearl, man imitates nature only insofar as he inserts the foreign object into the oyster to start the flow of the protective secretion, called nacre, which coats the object and eventually forms a pearl. When the oyster is about 2 years old, it is injected with an antibiotic to prevent infection and then an incision is made to create a pocket to receive the pellet which stimulates the flow of nacre. The oyster does the rest.

The finest pearls in size and quality are left in the oyster for 7 or 8 years and consist of many coasts of nacre. A 14-inch strand of these matched pearls might bring as much as $80,000.

Although the Japanese are credited with the success of the cultured pearl business, they needed a little help from the United States and Australia. It was found that the best foreign object that could be used to start a pearl was made of Mississippi River oyster shells. The shells are cut into strips, then into cubes and put into a gem tumbler to be ground down for insertion into the oyster. Each year nearly 6 tons of oyster shells are exported from the United States to Japan. The oysters in which the pearls are cultured come from off the coast of Australia.

While the natural pearl industry will never be the same in Panama or anywhere else, there have been indications recently that the pearl beds of Panama may be regenerating.

Pearl divers are at work again and on occasion find oysters containing pearls. Like their ancestors, Pearl Island divers remove the pearls, put them in a bag and offer them for sale to visitors.