All About The Commissary Book

Customs sometimes change and one of 45 years' standing in the Canal Zone - use of coupons for purchases in the Commissary Division's retail stores - is to be altered in one store on an experimental basis early next month.

Ancon Commissary has been selected for the trial balloon and during the next few weeks it will be rearranged and refitted for cash sales, thus modifying a practice which began August 21, 1905, when the use of coupon books was first inaugurated.

The plan for cash sales in the Commissary stores has been a subject of discussion and debate for many years and has been under serious consideration for several months. The trial in Ancon is being made principally as a customer convenience and Commissary Division officials do not presently believe that administrative and operating costs will be materially affected.

Old-fashioned "company book" coupons were used when this sales system was first adopted. The commissaries then had just undergone a series of changes. The present Commissary Division had its beginnings in 1883 when a small store was started in Colon to sell articles needed by Panama Railroad personnel. The stores were kept under the Company management until February 15, 1905, when the system was transferred to the Isthmian Canal Commission. It was transferred back to the Railroad only two and a half months later and at that time a system was adopted of requiring all employees to make a cash deposit in advance for articles bought in the stores. This system did not prove satisfactory and in August of that year the coupon system was adopted and has been used exclusively since, except for a two-month trial of cash sales in the Cristobal Commissary in the early 1920's.

Although it is too early to determine the desirability, either from customer or commissary viewpoint, of extending the cash sales system in the retail stores of the Commissary Divisions, the experiment at Ancon is working satisfactorily thus far.

The general customer comment in the Ancon store is to the effect that the cash system is more convenient. However, according to Charles P. Shay, Manager, many of the old Ancon customers have gone elsewhere to do their principal trading, obviously preferring the time-honored coupon method of buying their groceries and household goods.

Comparative figures on sales volume in Ancon and Balboa indicate an increase in trade in Ancon during the first few weeks of the experiment. Some of this increase, Commissary Division officials believe, my be due in part to the renovation of the store recently.

No additional U.S.-Rate Commissary retail stores are likely to adopt the cash system until about the end of this year, although it is planned to have cash sales for the toy sale which will be held next November in the Ancon Theater Building.

Gatun Commissary will be the first of the stores to convert to the cash system following the recent announcement that all U.S.-Rate stores will abandon the coupon system. The change at Gatun will be followed by conversion at Cocoli, Margarita, and Gamboa.

It is planned to make the change at the Balboa, Diablo Heights, and Cristobal stores simultaneously, probably early next year.

All of the changes are dependent on the arrival of equipment. The Commissary Division has placed requisitions for $35,000 worth of new cash registers, and for cash drawers which can be used with the present registers. Most of the stores will also require minor modifications before all housewives take spot cash to the stores for their groceries.

The cash system has worked well in Ancon and Curundu Commissaries and has apparently met with wide customer approval.

And for the Last Time! 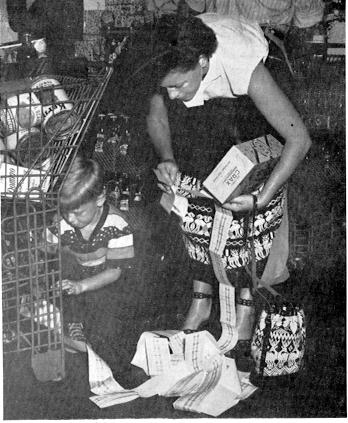 PATIENCE AND SELF RESTRAINT were badly needed by commissary patrons when a $15 coupon book accidently spilled out in front of a long line of customers. Mrs. Florence McElhone and her young son, Mickey, here demonstrate the apparently hopeless task of gathering and refolding the yards of commissary coupons in front of a line of impatient Christmas customers in Cristobal Commissary.

The same forbearance is being urgently requested by Commissary Division officials for the next few weeks while the cash sales system is being firmly rooted in several retail stores.

The system, first instituted experimentally last April in the Ancon Commissary, was extended in succeeding months to the retail stores at Curundu, Cocoli, Pedro Miguel, and Gatun.

It was inaugurated with the remaining U.S.-rate commissaries when they opened their doors for business Thursday for 1952. The stores changing from the time-honored coupon system to cash sales at the first of this year were those in Balboa, Diablo Heights, Gamboa, Cristobal, and Margarita. Cash sales were adopted at both stores in Gamboa since they are located in the same building and use several retail sections jointly.

Substantially the same system inaugurated in Ancon last April will be used in all stores with the cash system. All employees with limited purchase privileges are required to have cash purchase cards.

For the convenience of local-rate patrons at Gamboa Commissary, cash purchase cards will be issued monthly by the Payroll Division to all Dredging Division employees who make up the bulk of the patronage there. Other local-rate personnel trading in Gamboa Commissary will be issued cash purchase cards on request by the commissary managers or their assistants.

All U.S.-rate commissaries will redeem unused coupons until January 15. After that date unused commissary coupons may be cashed only at Balboa and Cristobal Commissaries until the end of April, after which they may be exchanged for cash only at the Finance Bureau offices at Balboa Heights.

No extensive alterations were required at any of the five commissaries which adopted the cash sales plan this month. However, for the past several weeks personnel in the various stores have been in training to make the system work smoothly. Despite the careful planning and special training for commissary employees, it is expected that some inconveniences and delays are bound to occur. Commissary Division officials have asked that customers be patient during this breaking-in-period.

Suggestions for any improvements at the various stores which will help speed up sales and save time will be welcomed from patrons.

An imaginary pair of scissors last Friday slashed an equally imaginary 54 ribbons of papers, each two-and-three-quarter inches wide, which stretched between Cristobal and New York.

The paper ribbons represent the total length of all of the commissary coupons that have been printed at the Printing Plant at Mount Hope since January 1920. They were snipped off neatly on October 31 when the Plant went out of the coupon printing business.

The ribbons are the figments of the imagination of E.C. Cotton, Printer, and one of the senior employees in the Canal organization from point of service. As he watched his coupon printing business draw to a close with the gradual conversion of commissary retail stores to the cash system of buying, Mr. Cotton compiled as fascinating a set of statistics as ever is likely to be produced here.

Placed end to end the coupons in these books would stretch 106, 938 miles and have 126 feet of coupons left over. That is equivalent to the 54 ribbons of paper stretching between Cristobal and New York.

Or, if you prefer, Mr. Cotton says, it could be one piece of paper, 11 feet and 3 inches wide, between New York and Crtistobal.

Into these 53,680,000 books went 1,085 tons of paper. Just about the only thing Mr. Cotton did not figure was how many copies of Gone With the Wind could have been printed from this tonnage.

Twenty-three Employed At Peak the years between 1944 and 1947 were the peak for the commissary coupon printing. At this time there were 16 U.S.-rate and 7 local-rate workers employed in this operation alone.

The few remaining books will be mechanically masticated and the scraps will be burned, according to Mr. Cotton.

Commissary books were a good deal more common back in 1905 when the Isthmian Canal Commission decided to use them in local stores than they were last Friday when the last book paid for someone's groceries. In 1905 they were common currency in many lumber camps or in railroad and mining company towns.

Started In 1905 Their use was authorized in the Canal Zone, according to the report of the Isthmian Canal Commission for the year ending December 1, 1905, after a conference held by the I.C.C. Chairman, the Chief Engineer and the Governor. When they decided to open retail commissaries "along the line," they also agreed that "among other things the sale of goods for cash was prohibited and a system of coupons devised which can be secured only from the timekeepers and in limited amounts."

The first books were printed by the Tower Manufacturing and Novelty Company of New York and by Byron S. Adams of Washington, D.C. From 1908 until 1915 the Allison Coupon Company of Indianapolis was the printer, with the exception of 1910, when the order went to the National Ticket Company.

Early commissary books were far different from those which have just gone out of local fashion. They were good for only 60 days; they contained blocks of coupons of various denominations (in various colors); the coupons were not perforated but had to be cut off by hand.

To further complicate matters, there were I.C.C. and Panama Railroad books and a third kind, good only in the hotels. It was not until 1912 that a uniform book was adopted and it was three years later, after considerable argument pro and con, that books of the "mileage" type were ordered. These were revolutionary; they not only contained a running strip of paper but each coupon was perforated for easy tearing off.

This same year, 1915, A.P.E. Doyle, then the Canal Printer, suggested that his press could print the coupons, but he was overruled by H.A.A. Smith, Auditor, who wrote: "In view of the circumstances surrounding the use of commissary books, I could not consent to having them printed on the Isthmus."

By late 1917, however, using what he described as "inadequate and crude facilities," Mr. Doyle was printing commissary coupon books. On January 7, 1918, he reported that the press had finished and delivered to the auditor 410,000 commissary books of the total value of $1,990,000, by working the press 7 days a week, around the clock, and with only Christmas and New Year as holidays.

The next year negotiations started for the specially built rotary press. Roy R. Watson, at the time Acting Chief Quartermaster, wrote the Governor that it had been "proven by actual experience to be a more practicable and economical proposition to manufacture commissary books on the Isthmus than to purchase them in the United States."

In June 1910, Mr. Doyle suggested that T.A. Aanastoos, then operator-machinist, and later Printer, go to Boston where the special press was being manufactured so that he could learn its details.