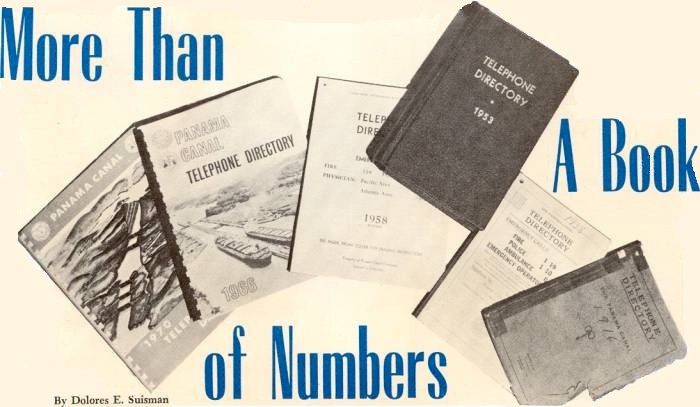 The Panama Canal telephone directory is a gold mine of information. It's an almanac, a history, and, if one wishes to be prosaic, it can even be used to look up a telephone number.

For 60 years, its size and content have reflected the growth and organization of the Company. The buildup of services as they became necessary and the decline of services as they became available in the Republic of Panama and through mail and freight service from the United States are quickly visible. The increase in personnel during wartime and the decrease with the return of peace are shown in its pages. In a very real way, it tells the story of the Panama Canal.

The first edition, published December 1, 1915, by the Panama Canal Press at Mount Hope, was a modest 59-page pamphlet-type publication bound in Government-green paper.

It was divided into two sections: a list of departments and divisions of the Canal organization and branches of the Army, and an alphabetical list of individuals. Out of a workforce of 26,897 employees, the 2,000 who had occasion to use a telephone in the performance of their duties were listed. Of these, only 343 rated a residence phone.

Although telephones had been in use in the Canal Zone since 1910, an official directory provided a golden opportunity to tell residents how to use a telephone; which it did in great detail.

The section entitled “To Make a Call to a Distant Exchange,” included directions for calling such “distant” exchanges as Pedro Miguel.

Looking under C fox: the number of the Corral, you were referred to B for Balboa Corral, G for Governor's Coachman, N for New Corral, or O for Old Corral.

But it was the cross-referencing that cited more suggestions and complaints than any other subject.

And from the most persistent suggester: "It is suggested that in the future editions of the phone directory that credit unions be listed together in a bunch. There are quite a bunch of them by now and it would simplify matters somewhat for subscribers. They don't always know the exact name but they do know the species of animal."

If suggestions did not change the directory, they convinced the Executive Secretary there was a problem. In 1917 he wrote to the Panama Canal office in Washington, for a copy of the Washington, D.C., telephone directory "and information which may be obtained without expense relative to the procedure followed in collecting and compiling telephone directory data.”

The result was a 110-page “big-city” type telephone directory with Panama Canal activities, military activities, and individuals in one alphabetical listing.

But if the problem of organization was solved, cross-referencing was still in its infancy.

The following year, an announcement in The Panama Canal Record  reported a new directory in print and that “cross references are used extensively to assist in finding a number with a minimum of research.”

“Used extensively” was an understatement.

Now to find a military number, you had to know you were to look under M for “Military” where you were advised to see A for Army, B for Bands, Army, C for Camps, F for Forts, G for Guards, N for Navy, T for Troops, or U for U.S. Army.

Every year the original little pamphlet grew as personnel increased and pages of information were added.

Now instead of jiggling the hook for the operator, you were told to dial 112 for a fire, 113 for police, 114 for information or 0 for an ambulance of the emergency operator.

Instructions for using the automatic hones began with the exclamation CAUTION!!! CAUTION!!! centered at the top of the page.  Under this warning were listed all of the things you could do wrong.  The list ended with the disquieting thought that "You will probably disconnect your telephone if you hang up the receiver before you finish talking."

Once an item was in the directory, it took a declaration of war, subterfuge, or a drastic budget cut to get it deleted.  The warning that you could disconnect your phone by hanging up the receiver was reprinted in every issue for 27 years.

It wasn't long before the information pages included rates for long distance telephone calls (all calls beyond Darien cost 25 cents); hospital visiting hours, business in the Administration Building (8 to 12 and 1 to 4, except Sundays and holidays); business hours for 16 post offices, a complete restaurant schedule and departure and arrival times of a launch service to Taboga Island.

The the tide tables that were to become so controversial appeared,the Panama Railroad timetable, hours of business for commissaries and clubhouses; and later, hours of operation for gasoline stations, banks, storehouses, libraries and schools.

There was no end to the vital informative material that was added year after year.  soon there were moonrise and moonset tables, sunrise and sunset tables, passenger connections from the Canal Zone by ocean or air, an airmail schedule (to Miami and Brownsville four times weekly), sailings of the Panama Railroad ships.

And warnings.  Subscribers were urged to keep social calls on residence phones to a minimum during business ours and were told they must not use a Panama Canal telephone in any manner whatsoever to request or transmit information concerning lottery numbers or tickets, or any other business pertaining to lotteries.

There was even an 11-page alphabetical list of every steamship line that had a representative on the Isthmus with capsuled information about the services it offered for subscribers who had to know that "The Societe Francaise d'Armement has a freight service with steamship Alsace between Le Havre and Chilean Ports."

The additional pages of information and the needs of the employees increased the size of the telephone directory.

The book continued to grow bigger, the listings more numerous, the cross-referencing more complex.  but nothing increased so much as the cost.

The price of printing 2,000 copies of the first directory in 1915 was $145.  by 1918, that figure had doubled.  The Army picked this unfortunate time to reply to the annual request for updated telephone listings with a request for three Army lists—one alphabetical, another classified, and a third to be inserted in the regular Panama Canal listing.  And, they asked, please print each list on a different and distinctive colored paper.

When apprised that this special treatment would cost $600, they decided to let well enough alone.

By the time the book was 5 years old, the cost of printing had increased to $1,435 for 4,000 copies, and a committee was formed to study the matter.  for 2 years there had been an edition in January and July.  this luxury was the first to go.  But when the committee found that the telephone expenses were in excess of revenue, they decided that 154 pages for a directory of a telephone system with only 2,518 subscribers "seems larger than necessary."

Although anxious to economize, committee members were unanimous in their decision that employees could not take their old phone books with them when they moved because "it is not considered sanitary to carry the old books along with the phone to new quarters."

After many meetings, the committee wrote a report that ended: "The question is largely whether the Canal wishes to issue a first-class book, such as the present one, or to issue a less attractive-looking book."   They compromised by keeping the first-class book and adding to revenues by selling the book to subscribers for 40 cents and allowing subscribers to the Panama and Colon telephone service to have their names inserted in the Canal directory upon payment of $1.

Since just about everyone wanted his name inserted, this brought about the problem of what type of subscriber could be listed without offending the user of the directory.

Liquor companies were among others not considered proper for inclusion in the Canal directory.  It was 30 years before a realistic Governor penciled the note "no objection to any legitimate business" on a memo and that ban was lifted.

One of the few events that could and did reduce the information pages of the Canal director was the advent of World War II.

"Perhaps enemy countries should not be listed as having diplomatic and consular officials in Panama," someone suggested.  Someone else wrote, "In view of the existing international situation it is extremely difficult to determine just who should be included in our telephone directory."   And the diplomatic and consular lists were never seen again.

The Army worried that "non-secret telephone directories in general use constitute a perfect means for enemy agents to acquire complete information concerning military units," and the military disappeared from the directory.

Now changes often meant less rather than more.   The farms, the pastures, the markets were long gone and, in 1952, the directions for using automatic telephones were at long last removed.

But the tide tables, which had stirred more controversy than any other subject—pro and con—seemingly were to go on forever.

Then, in 1965, a daring decision was made, and a memo worthy of war plans written:   "Cleared with governor.  He was informed of possible repercussions.   Following is decision.  Remove from telephone book.  Put notice in new directory.  No Spillway or any other notice."

Some changes were more dramatic than others.   After the military was listed in the directory for a few post-war years, they were notified that the Canal could no longer afford to carry their listings, and a joint military-Panama Canal feasibility study of a uniform format for military and Panama Canal directories resulted in the large book that first appeared in 1958.

Staples became a big issue in 1959 when townsite maps appeared.  If letters from subscribers are to be believed, no one every looked for directions or a house number except to find that what they were looking for was directly under the staple.

The trusty old staples were thought of almost fondly in 1974 when faulty glue caused the directory to come apart page by page after it was used a few times.

For the most part over the past 20 years, the telephone book went unmolested.  Few people thought about changing it.  In 1963, emergency numbers were moved to an inside page and there was an illustrated cover.  A few years later photographs appeared on the cover, and a contest in 1970 resulted in a two-color cover.