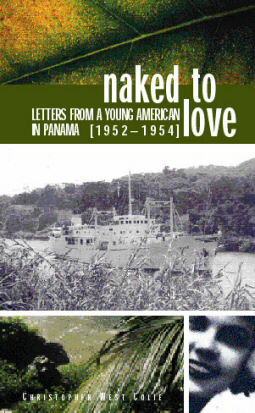 From Kevin Bentley, Publisher - Council Oak Books:
Naked to Love: Letters from a Young American in Panama brings together two years (1952-54) of romantic, articulate, sometimes desperate love letters written by a twenty-two-year-old, Christopher Colie to his wife, Carole. Chris was an adventurer who'd hopped freight trains, shipped out on freighters, sleeping in flophouses and hobo camps, and spouting poets like Patchen and Rimbaud (the title comes from lines of Kenneth Patchen quoted in one of the letters). Drafted, and after various misadventures, sent to Panama, the rebellious youth faithfully records the volatile mix of reluctant conscripts, the exotic landscape and people of the Zone, and his yearning, lyrical love for his distant wife. These are the kind of aching love letters every man should have written and every woman hopes to receive once in her life. They're also the witty and heart-breakingly honest portrait of a young man.

The main interest to CZBrats I imagine will be the descriptions and anecdotes about coming to Panama via ship in the early 50s, the awestruck descriptions of the scenery, and the place-connected anecdotes related in the letters. Chris was stationed at Ft. Clayton and had guard duty at the Miraflores Locks. And CZBrats will recognize the ship photo on the book jacket as one from the web site, kindly provided by Bill Fall.

I have waited around a long time to tell you about Panama—the same way as with San Juan and a lot of the trip down here, waiting to write the whole thing well—and as a result so much has piled up that it’s hard to get started with it. I’ll try to tell you how it is down here.

On the train backing and waiting across the switches outside the pier in Cristobal, we came backing slow along the edge of the bay in the hot midday sun taking our first look at Panama. By the tracks colored guys going no place standing and sitting on scattered blocks of cement by the edge of the water watching us go by. Little kids and barefooted women walking along by the train selling bananas through the windows. A skinny little brown kid trotting along under the window in red bathing trunks and a GI shirt with the sergeant’s chevrons ripped off flapping around his knobby knees. The women in light bright dresses along the cinders and tattered grass beside the tracks, barefoot and sweating, big breasts bouncing. More canoes and skiffs on the beach and some kind of village or camp looking like a hobo jungle that’s gotten tangled with a rainbow. Here are trees and shacks cluttered among them. Large, spreading trees and splotched shadow across leaning, broken fences, smashed crates, a gray-bleached, splintered dug-out belly-up and tangled in the brush along a slat fence, the bright green weeds pushing up through. The big green trees spreading above the clustered shacks in a green vault, the shacks unpainted, and between them the earth dark, bare and smooth. Canoes spread all around with men working on them, women washing clothes in metal tubs, the washing they’re done with strung in zigzag lines of color among the shacks like Japanese lanterns and people under them talking, laughing, moving, washing, working, sitting in front of the shacks. A husky, bare-backed, kid walking along shadow boxing, his smooth black body sweating and shiny, ducking his chin into his shoulder and smacking his left out in quick jabs, skipping as he walks along, stops to talk with a bunch of his friends sitting on a tipped over skiff. Kids running shouting along the beach and in the water.

All under the bright, green, cool, spreading trees. This whole scene was green and cool like it was underwater.

Jesus, I’m tired. I’ve been fighting myself to keep awake and finish this. Anyway I wanted to write it to you—my first sight of Panama.

I love you. I’m on guard again today but it looks as if I’ll be clear for a while now. I may be able to get some kind of a letter written this afternoon while I sit around the guard-house.

This is a true yellow tropic sun here that comes pouring down over everything like in Van Gogh. The sun is the main thing in the picture down here—yellow on the land melting over everything and searing, glaring white sometimes as it hits white sand and turns it purer, brighter white or burns along the sides of buildings and out in the open. Yellow sun poured down from a blue sky on green trees and grass and long, big red-tile-roofed barracks, cool and shaded on the inside and yellow-painted on the outside.

Down here more than ever before I find myself caught with the pictures of life and movement. On police detail as a platoon moves in broken line across the bright flat green background of grass, I look at the picture of each figure sharp and distinct—the clothes and angles of the body, the faces—each one of these things drawn so clear in my eye: a guard with his Panama hat shading his eyes and the dark angle of the gun across his arm and the prisoners marching before him—a guy stopped to light a cigarette and his body turned from the waist to put his back to the wind, silhouetted against the sky and smoke blowing from his cupped hands sideways in the light—a column of men in sun-bleached fatigues marching down a bright palm-bordered sidewalk. It hits me in everything I see: the brightness of each scene in this land—the whole of life thrown together in these sharp, vivid scenes. Christ, it’s a good deal just to be in a place like this with your eyes open.

In formation coming past the stockade in the evening, some guy in there has flipped his lid and is bawling and yelling so loud you can hear it all the way after you’ve crossed the parade field: "I didn’t know it would happen. I didn’t know it would happen." You really have to be far gone to be yelling crap like that, considering all the self-righteous punks who are walking by in hearing distance. But that was under this same sun, particularly beautiful in the still, late afternoon, with red clouds down low in the western sky and the east turning purple.

I love you. I think about you during the day—the way you are, the way you act and look and talk. In the evenings I think about the way it would be if we were together. At night after I’m in bed I pretend you’re in bed with me and we talk a while and I wind up wanting to sleep with you. I love you.

A big ship, a passenger, was going past, so we went out to watch it. The passenger ships impress hell out of these guys. Personally I’d as soon go watch a hotel.

We all run happily across the dark field into the light by the locks. "Jesus, look at that bastard. That’s a ship." Abruzzi turns as he runs, his grin flashing in his smooth face. "Hey, Colie. Quick—run in and write it."

We stand by the locks and the deck of the big ship is close to us: all the tourists sitting on chairs, a lot of them with their feet up on the rail. Abruzzi is joyful over the possibilities for looking up the women’s skirts. "Look at that one. Hey, baby, how about it?"

Colby is interested in where the ship’s from. It sits there waiting for the water to start to drop. He yells over at the tourists. "Hey, where you from?" They sit and look at us. "Hey, buddy, where’s that ship from?" Either they can’t hear or don’t want to answer. Colby stands there, a stocky muscular southern kid, looking offended. Goddamn. He asked that in a nice way. Ain’t no reason they shouldn’t answer. Why can’t people act decent when you treat them decent? This makes him angry, so he begins to look at them in an angry way. When people make him angry he looks at them in an angry way and decides he wants to hit them. Goddamn, you try to act right and they got to give you shit and by God you ain’t taking shit.

Abruzzi stands at tremendous ease. His shoulders shrug and he lifts his hands in gestures and talks wisely along to us—flashes tremendous grins and talks some more. He’s trying to impress the tourists. Here are a hard, wise bunch of GIs standing at ease on a foreign land. He thinks they should be impressed. For one reason or another I do too. After awhile the ship drops down deep into the locks.

I don’t have time for more. Christ, there is a lot more. I love you. Please write.