JOSEPH PENNELL: THE WORLD WAS HIS STUDIO
The Panama Canal Review, February 1965

During the time he was in Panama -January to March 1912- Pennell came to respect many other Canal construction men as good workmen and dedicated men.

In his introduction to The Panama Canal Pictures, Pennell said,  "The interest of these Americans in my work and in their work was something I had never seen before.  A man in huge boots, overalls and a ragged shirt, an apology for a heat, his sleeves up to his shoulders, proved himself in a minute a graduate of a great school of engineering.  He proved as well his understanding of the importance of the work he was trying to do, and his regret that most painters could not see the splendid motives all about; and the greatest compliment I ever received came from one of these men, who told me my drawings 'would work'."

Pennell, who was afraid that he had arrived in Panama too late to get the pictures he wanted, found instead that the construction was exactly at the right stage.  As his world-famous lithographs show, "industry at the Canal was on a colossal scale.  The locks were yawning gulfs, their stupendous arches and buttresses not yet hidden as they would be once the water was let in."

Pennell later expressed himself as no less impressed with the order that went with the construction activity and the apparent pleasure of everyone -high or low- with the work they were doing.  "The workmen worked as if to work was neither a hardship nor an imposition.  I never met anyone who wanted to leave; and I believe that the threat to send the men home broke the only strike on the Canal." 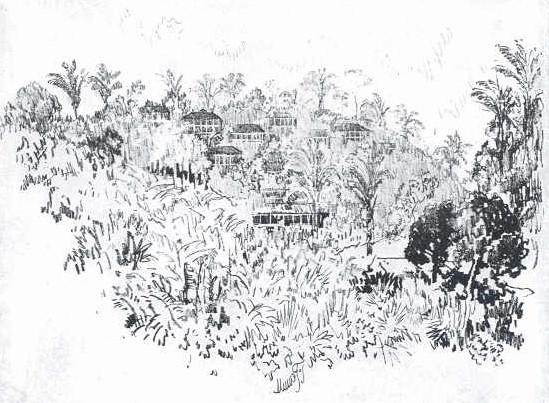 Although Pennell is best known locally for the 30 lithographs drawn of Canal construction, he was a famous artist and an authority on etching and lithograph and a picturesque personality, as well, long before he came to Panama.

A Quaker born in Philadelphia in 1857, he had the Friends' habit of speaking his mind, a good journalistic sense, and a gift for salesmanship which brought him success by the time he was 25.  His first important work was to illustrate a series of articles by George W. Cable on New Orleans.  The New Orleans etchings and drawings made such a stir that he was asked to go to Italy to illustrate articles by William Dean Howells.

He married Elizabeth Robins in 1884 and they spent their honeymoon taking a tandem bicycle trip through England.  Later they traveled by bicycle through Europe -he sketching and Mrs. Pennell writing.  Pennell's etchings made an impression in Europe and were first shown at the Exhibition of the Society of Painters-Etchers in 1885.  he produced an amazing amount of work with most of it being reproduced in American and English magazines.  He also illustrated a number of books.

He was interested as much in the art of printing from plates as in making them and believed both processes were equally the business of the etcher. Later his close association with James McNeill Whistler made it natural that lithography would attract him.  He really became enthusiastic over the process in 1895 and in 1909 founded the Senefelder Club in London to bring lithographers together and hold exhibitions of their prints.

He felt that the art was a medium peculiarly well adapted to the portrayal of factories and he described these industrial prints as "The Wonder of Work" of which the Panama lithographs were part.  The Panama drawings, it was said, were never surpassed for richness of color and virile strength. During World War I, he made lithographs and drawings of British plants engaged in war work later published as "Joseph  Pennell's pictures of War Work in England," and worked on several projects in the United States. After the war, he taught etching at the Arts Students' league in New York, wrote several books, served as an art critic on the Brooklyn Eagle, and helped run the New Society of Sculptors, Painters & Engravers.  He died in 1926.

Pennell is considered to have done more than any other one artist of his time to improve the quality of illustration both in the United States and abroad and to raise its status as an art.  He produced more than 900 etched and mezzotint plates, some 621 lithographs, and innumerable drawings and water colors.

He was a member of numerous societies both in the United States and Europe, was awarded medals at many expositions, and his work is represented in museums and galleries in various parts of the world.