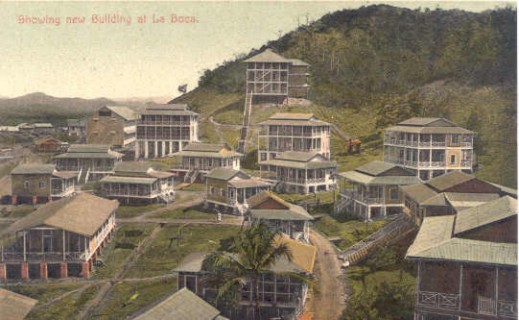 If a section of Panama Railroad track had not sunk six feet one morning in 1907 - "The Mouth" - might not be where it is today. The La Boca area might look like the environs of the two-step locks at Miraflores instead of what it is - one of the Canal Zone's oldest local-rate towns.

The canal plan had called for two sets of locks, one at Pedro Miguel and the other near Sosa Hill. They were to have been separated by a large terminal lake, to be known as Sosa Lake.  Not all the Canal's top men - John F. Stevens, among them - approved the idea but had begun work on the damns for the lake.

After the section of track near La Boca sank suddenly and a trestle toppled, Chief Engineer George W. Goethals appointed a board to study lock sites. Eventually the locations were determined and La Boca returned to its former status of Pacific terminal for the Panama Railroad and the only Pacific port between Callao in Peru and Salina Cruz in Mexico where deep-draught vessels could unload at a wharf. It seems strange today to read that the transfer provided not only more stable foundations but also better protection from bombardment from the sea!

As far as its history goes, La Boca went through three phases. At La Boca the old trail from Panama City to the towns which are now considered to be in the "Interior" crossed the Rio Grande. The French Canal Company, as the Americans did later, used the valley of the Rio Grande as the southern end of their canal line. In 1881 they began to build shops at La Boca where their dredges could be assembled.

One historian reports that the French Company loaned enough money to the Panama Railroad for construction of a deep-water harbor and a 960-foot steel pier. This pier, which eliminated the old lighter system, is still standing although it has been much changed in appearance. Just as the Americans did later, the French planned for a double lock near La Boca.

When the French Company sold its interests to the United States in 1904 the buildings and wharves in La Boca were part of the properties transferred. No better description of this phase of La Boca can be found than the following, from the 1905 report of the Isthmian Canal Commission:

"Repairs on the old ones have reached such a point that it is proper to say that this portion of the town has been rebuilt and instead of being a dangerous plague-spot, the town has now become a model camp with houses in good repair, freshly painted, supplied with electric lights, a water system and good drainage. A good road of Telford pavement constructed by the Commission connects La Boca with the outskirts of Panama."

This was written after two cases of bubonic plague had broken out at La Boca. The resultant quarantine disrupted the transportation system and called for stringent measures by sanitary authorities.

At this time La Boca was primarily a settlement for American employees. Its commissary, opened in September 1907, supplied Ancon and Balboa by wagon each morning; current from its electric light plant was furnished to Ancon and Balboa and, later to Corozal.

There was an elementary school, located about where the present Service Center stands. In September 1908, however, The Canal Record reported: "Owing to the small number of children attending school at La Boca last year, that school has been abolished and the children at La Boca will be transported to and from the school at Ancon in a wagonette."

This phase of La Boca history ended in April 1909, when, by executive order, the town was renamed Balboa. The Peruvian Minister to Panama had suggested the change, saying "As the Atlantic entrance to the Canal is named Cristobal Colon for the great navigator and discoverer of our continent, so should the Pacific entrance be named after the intrepid Balboa, its discoverer."Thereafter, although there continued to be a Pacific side town it was known as Balboa or East Balboa, and the name La Boca disappeared from official records, temporarily.

In August 1913, exactly one year before the S.S.Ancon made the first official transit of the Canal, Colonel Goethals authorized "the construction of a labor camp at La Boca to provide accommodations for West Indian laborers." At the time the name for the town had not been chosen.

Several names were suggested: La Boca, Lesseps or deLessps; Espinosa, after the founder of Old Panama; Morgan Town, for the buccaneer; and Lincoln, in honor of the Civil War President. Some objection was found to all except the first of these and on August 18, 1913, the town was officially named La Boca.

La Boca, substantially as it is today, was laid out in a rectangular plan on part of a large fill, southeast of Sosa Hill. Both streets and avenues, which now bear such names as Martinique and Grenada Streets and Jamaica Prado, were originally numbered. The town was divided lengthwise by a park; family quarters were all on the south side and bachelor quarters on the north. A commissary, near the present entrance to Dock 6, supplied "canned vegetables and cold storage goods."

An elementary school was opened early in 1914 and in September of that year its enrollment was 129. Last year over 1,000 students attended the three La Boca schools. Street car tracks ran parallel to La Boca Road and provided transportation to Panama City. The street car service was maintained until 1941.

Some of the houses were new but many were brought from towns which were being abolished. There were the old hospital, dispensary, and commissary from Porto Belo, converted into living quarters; a laborer's barracks from Gorgona; a barracks from Paraiso; two houses from Gatun; and several from Diablo. Not all of them had plumbing or kitchens. Wash houses, outhouses, and cook sheds stood behind each small group of quarters.

Wood to fuel the stoves was dumped daily into boxes at the entrance to each set of quarters by a wagon from a sawmill located where the Balboa police station now stands.

Maintenance of La Boca was something of a problem. In late 1914, the administration offered prizes of $5, or a percentage reduction in rent, for the best-kept, neatest, and cleanest quarters of various types. The prize system was followed for about two years.

While La Boca was primarily a town for local-rate workers, there were a few American families living there.  Most of the Americans were people waiting completion of quarters in Balboa and Balboa Heights.  Old La Bocans still call the street where they lived "Gold Street."

In 1915 the Acting Governor, Chester Harding, turned down a Metal Trades Council request that the La Boca quarters be assigned to Americans and said: "The Administration hopes to provide quarters sufficient to house every Gold employee on the permanent force. Quarters are being constructed as fast as the money is available. I think the present unsatisfactory state will not continue for more than a year."

Present day Zonians know La Boca as a great sports town and it was in its hey-day in the 20's and 30's. The East End cricket team, later the La Boca Cricket Club, drew big crowds to their Sunday games and mid-week games were scheduled whenever a British ship came into port.

Both men and women played "rounders,"a sort of ballgame, between their quarters, and the youngsters diverted themselves sliding down Sosa Hill - nowhere near the same shape now as it was then - on palm fronds, or swimming in the sea behind the old Clubhouse. Dominoes, which can be quite an athletic sport when played in La Boca, was an under-the- house pasttime.

Goats, kept for their milk, wandered through the town and bees from the numerous apiaries - some families had as many as 30 hives behind their quarters - stung unwary passersby. Fishermen, in those "good ole days," sold their catches, not by the pound but by the string and for as little as 10 to 15 cents a string. Movies cost 5 cents for youngsters in the silent film days.

The war boom almost doubled La Boca's population. From 3,228 in 1930, the town swelled to 6,076 in 1942. Contract laborers from Colombia, Salvador, Costa Rica, and the West Indies were housed in giant new barracks and fed from central messhalls.

As nearly as possible they were separated by nationalities - Jamaicans in one building, Columbians in another, etc. - but despite this there were international difficulties which flared into frequent disturbances until the men learned to work together and keep their frazzled tempers under control. Sports helped to make them friends - although international rivalry was keen - and the various groups formed football teams which drew crowds of two to three thousand at their matches.

During the hectic World War II period the town's facilities were strained. A theater was built as an addition to the Clubhouse; the restaurant was enlarged. A library and emergency fire station were built. Town spirit made itself felt in an active Civil Defense group.

After the end of the war the contract laborers went back home and the town returned to normal, except for such flurries of excitement as the Commissary fire in February 1950. An emergency commissary was established in the old restaurant but it was months before the badly-damaged Commissary bulding was repaired and back in operation.

A year ago La Boca was a community of about 3,000 and its population is still dwindling as its people are moving into newer and more modern quarters in Paraiso. But there are still six churches in the town.

It still has its big Commissary and one of the largest Service Centers - La Bocans still call it a clubhouse - in the Canal Zone. Headquarters for the Balboa Federal Credit Union are in the Service Center building and its auditorium, once the movie hall, is used for public meetings. The building also houses a barber shop, beauty shop, and shoe shop and a small private typing school is operated in its basement.

The Lat-teen Club, a junior organization, is back in the old restaurant building from which it was hastily evicted when its space was needed for the emergency Commissary. This club provides a recreation spot for the senior juniors of the town.

Dominant features of La Boca are the two school buildings. During recess periods, between classes and just before and after school, that end of town is a hub-bub of activity.

Old La Bocans are proud of the fact that their town has not lost its reputation as a "great town for sports." Cricket is back again and one fan holds that this year's league is the best yet. There is still football - of the soccer variety - baseball, and softball. Outstanding athletes, like Carlota Gooding who recently won the 100-meter race in the Central American Olympics, and Frank Prince, who won the 800 and 1,500 meter events at the same Olympics, are products of La Boca training.

No story of La Boca, the townspeople say, would be complete without mention of them and the man who trained them and other youngsters - Ashton Parchment, La Boca physical education director.